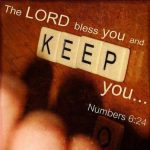 My dad died last Sunday after 92 long and full years. I’ll be taking his funeral after Easter and reading John 14, the passage he asked to have read which was given to him by his mum when he was baptised as a 15 year old just before the outbreak of war.

He worked so hard as a solicitor for the Metropolitan Police, advising on which cases should be brought before the courts, long days, sacrificing  much, so his three boys could have the best possible start in life. He loved all sports, especially football, tennis, fishing, and in later years representing his county in bowls.

He left two indelible marks on my life – the way every Sunday after lunch we would all get on a bus to visit his parents and help them  keep their huge garden under control. Every Sunday, honouring his parents.

The second impression was the way for 66 years he honoured his wedding ring. He had made a decision not just to get married but to stay married, until death. And he did. Thanks Dad.